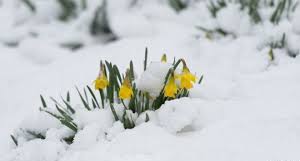 In the weeks between the November election and January inauguration, the great majority of us on the other side of madness were in shock, beginning to mobilize, but also holding out hope that somehow, some way, this political nightmare would be averted. Time seemed to stand still, and then, it was done. We found ourselves waking up in a whole new reality, waking up in an America we did not recognize, waking up in the age of Trump.

And now it’s March. In just six days it will be Spring. Although here on the East coast we’re being slammed by winter weather we barely had all winter. Last week, sixty degrees and daffodils blooming. Today they’re buried under the snow. The sweet promise of new life and renewal postponed for the time being.

Which brings me to the Bhagavad Gita. When I was younger in my journey, I devoured texts like this one. I couldn’t get enough. These last years though I’ve mostly stayed away from them. Partly it’s the patriarchal language, partly what sometimes seems a jungle of verbiage. At this stage of my life, I way prefer the naked simplicity of Mary Oliver’s poetry and Robert Bly’s Kabir.

And yet, the Bhagavad Gita is a powerful compendium of the yogic system. And has a great deal to say about waking up, about the difference between authentic power and something that pretends to be. About true greatness of soul and that empty charade that is grandiosity and smallness. Like so many of India’s ancient wisdom texts, no one knows for sure when this one was written. Scholars date it sometime between the fifth century B.C.E and first century C.E.The wonder of it is, it’s incredibly relevant for now.

Because along with articulating the philosophy and psychology of Yoga, the Gita offers a rather precise technology for strengthening ourselves from the inside out, so we can not only meet, but act effectively, to counter the dangers of this time. There is so much work to do. So many moving parts. So many different voices and needs to attend to. It’s easy to lose focus, burn out, numb out, and feel overwhelmed. Working with the Gita offers a steadying, sobering, and heart-drenched medicine for standing strong in the face of that and those who dare to cause harm…

The edition we’re using is Stephen Mitchell’s Bhagavad Gita: A New Translation. My scholar friends will thumb their noses, but I do like his version. Perhaps it’s Mitchell’s long training in Zen. True to the text and written with great respect and reverence, there’s a spareness in his writing I respond to. The Introduction alone is superb. Mitchell really gets it! Here’s how he opens:

One of the best ways of entering the Bhagavad Gita is through the enthusiasm of Emerson and Thoreau, our first two America sages. Emerson mentions the Gita often in his Journals, with the greatest respect…

It was the first of books; it was as if an empire spake to us, nothing small or unworthy but large, serene, consistent, the voice of an old intelligence which in another age and climate had pondered and thus disposed of the same questions which exercise us.

What a revelation the Gita must have been for minds predisposed to its largehearted vision of the world. And what a delight to stand behind Emerson and Thoreau, reading over their shoulders as they discover this “stupendous and cosmogonal” poem in which, from the other side of the globe, across so many centuries, they can hear the voice of the absolutely genuine. Here is a kinsman, an elder brother, telling them truths that they already, though imperfectly, know, truths that are vital to them and to us all. In the Gita’s wisdom, as in an ancient, clear mirror, they find that they can recognize themselves….

And here’s how he closes:

The healthiest way to begin reading and absorbing a text like the Bhagavad Gita is to understand that ultimately it has nothing to teach. Everything essential that it points to—what we call wisdom or radiance or peace—is already present inside us. Once we have practiced meditation sincerely and seen layer after layer of the inauthentic fall away, we come to a place where dualities such as sacred and profane, spiritual and unspiritual fall away.

Zen Master Hsueh-feng asked a monk where he had come from.The monk said, “From the Monastery of Spiritual Light.”

The Master said, “In the daytime, we have sunlight, in the evening, we have lamplight. What is spiritual light?”

In that place, God is the ground we walk on, the food we eat, and the gratitude we express, to no one in particular, as naturally as breathing.

How’s that for a beautiful (and over the top tantric) definition of God.

Here’s the audio of my first Dharma Talk on the Gita. This is from January 30, 2017. I also want to add that for no rational reason I can articulate, but from the shakti that informs my work, the mantras we’ve been chanting this cycle are Om Tara Tuttare Ture Swaha and Namo Kuan Shih Yin P’u-Sa. This talk opens with a just shy of 3-minute explication of the Tara mantra.

Welcome to the Monday Night Blog

Visitors to this blog know that over the last few years, my posts have been far and few between. This has never been about a lack of care. It has only been, and continues to be, about lack of time…

I started writing a book about my work earlier this year. The writing hums along but does require all my extra bandwidth. I’ve thought about pulling the plug on this blog, but it’s such a content-rich portal and has been such a labor of love, I can’t bring myself to take it down. And who knows, down the road, perhaps I’ll find the energy for blogging and compiling this book.

In the meantime, thanks to everyone who visits here. Do keep scrolling down through the archive. There really is a great deal of material here.

With love to you all.

I started teaching Monday Night Class at the Princeton Center for Yoga & Health in 1997. I’d been a student of Siddha Yoga since the 1977 and had recently moved on from that guru-centric tradition. Although the paradigm of guru yoga no longer worked for me, I still found tremendous beauty, power, and wisdom in the yogic path. So I immersed myself in a process of discernment, separating out what I now saw as dogma and magical thinking from what I perceived as essential truth. Monday Night Class was born from that inquiry.

In Monday Night Class’ early years I clung to traditional texts and teachings. As I grew stronger in my process, I started taking more risks, allowing my inner vision to guide me. Class grew, year after year, developing, deepening, opening into its essential heart.

The Monday Night Blog began in 2010. We were working our way through Stephen Mitchell’s translation of the “Tao Te Ching.” Along with this text, I was bringing in sacred poetry, stories, and wisdom teachings from parallel traditions. It made sense to collect all this material in one place and the Monday Night Blog was born. Along the way, we started recording my dharma talks and class chanting, adding an audio dimension.

The demands of my life have forced me to cut way back on regular blogging. Hope springs eternal however, and I hope to return to more regular posting in the new year.

Thanks for visiting. We look forward to seeing you again and again.

This is not an exhaustive list of all source texts I bring to class. Simply a gathering of ones I come back to again and again...

Robert Bly
The Kabir Book: Forty-Four of the Ecstatic Poems
of Kabir. The Seventies Press. 1977; Kabir: Ecstatic Poems. Beacon Press. 2004; The Soul is Here for Its Own Joy: Sacred Poems from Many Cultures. Ecco Press. 1995

Thomas Byrom
The Heart of Awareness: A Translation of the Ashtavakra Gita. Shambhala Dragon Editions. 1990

Jane Hirshfield
Women in Praise of the Sacred: 43 Centuries of Spiritual Poetry by Women. Harper Collins. 1994

Lex Hixon
Mother of the Universe: Visions of the Goddess and Tantric Hymns of Enlightenment. Quest Books. 1994.

Edwin Bryant
The Yoga Sutras of Patañjali: A New Edition, Translation, and Commentary, 2009

Chip Hartranft
The Yoga-Sutra of Patanjali: A New Translation with Commentary; Shambhala. 2003